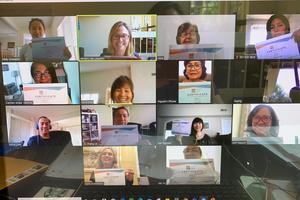 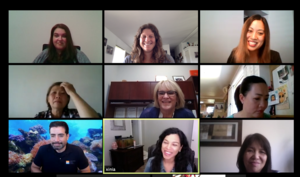 This year, HBAS added scholarships to the ESL Promotion Ceremony.

In 2018, the ESL department hosted its first Promotion Ceremony to celebrate the students who completed Level 4 Advanced class.  The 2020 school year ended quite differently than expected, with the last couple months of school taking place online. Since we were unable to host a traditional ceremony this year, Level 4 classes held virtual Promotional Ceremonies.

This year, we celebrated 83 students that promoted out of our ESL Program, and awarded two $500 scholarships. Administrators Steve Curiel and Susan Torres joined these Zoom meetings to congratulate promoting students and announce the scholarship winners.

The scholarship idea came about last year during a conversation about our promotion ceremony and how nice it would be to offer ESL students an opportunity to win a scholarship. Afterwards, Counselor Ashley Nguyen approached Amaro Ngo, President at Definity, and Quang La, Director of Operations at Cyvex Nutrition. The three reminisced about the struggles their own families overcame as refugees to the United States, and what it was like growing up as English learners. Amaro and Quang generously offered to donate scholarships on an annual basis.

Assistant Principal Susan Torres is “so thankful to our donors for recognizing our fantastic students. We are excited to be able to reward their accomplishments and encourage them to continue on their journey to improve their lives and the lives of their families.”

To apply for the 2020 ESL Scholarships, students submitted a 3-paragraph essay about their experience learning English at HBAS and their future career or educational plans. A scholarship committee read all the essays and selected two winners.  Drumroll please…

In Ms. Robert’s last Zoom meeting, Counselor Ashley Nguyen announced Xinia as a scholarship winner. Teacher Lauren Roberts described her as “kind and enthusiastic. She would get extra copies of the homework when her friends were absent and give them copies of her notes.”

In her essay, Xinia described the English and life skills she gained in Ms. Robert’s Level 4 class. In addition to grammar and US holidays, she “learned about her rights for work, and how to increase her credit score, make a resume and be confident for an interview.” This year, Ms. Robert’s class also had regular visits from Career Readiness instructor Nami Ayogi. Xinia credits her time with Nami and Job Developer Arlene Flores for helping her get hired.

So what’s next for Xinia? “My dream is to become a nurse, so thanks to the online classes now I know my career pathway.” Her next steps will be to train and work as a CNA and earn her high school diploma at HBAS. She plans to “take classes to become and LPN or LVN and that finally will help me to become a Registered Nurse.”

When Marianne was announced by Assistant Principal Susan Torres as a scholarship winner in Ms. Hammoud’s last Zoom meeting, the class erupted with cheers.

Marianne came here from Egypt in December 2018 and started taking English classes at HBAS in March 2019. During this time, she completed levels 3 and 4, and “gained a lot of confidence…and learned how to communicate with people, especially with my children’s teachers.”  Marianne also “learned how to make a Google slide show…and made a lot of friends from different countries, that helped me to have cultural conversations and open my mind to the world.”

While at HBAS, Marianne has been motivated to expand her educational path beyond ESL.  She has taken the CTE Math Refreshment and Computer Basics classes.  Her future plans include registering in the Medical Assistant Program at HBAS and studying nursing at Golden West College.  Marianne explained, “I think studying in the medical field is the best for having a good job in the future. I love to help people who are really in need.”

We are thrilled that Xinia and Marianne are both continuing their educational path at HBAS. Our Support Staff will continue to support their journey at HBAS and beyond. We hope these scholarships help in the pursuit of their dreams.  Good luck and congratulations to Xinia, Marianne and the ESL Promoting Class of 2020!