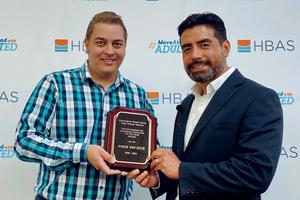 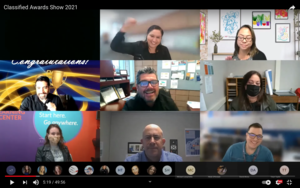 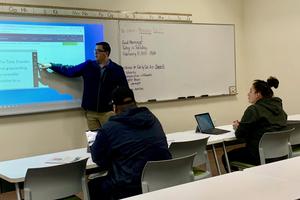 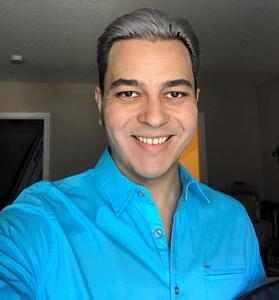 2021 Classified Employee of the Year AND Student Success Story.

Jorge stepped into Ms. Hammoud’s ESL classroom for the first time, looked at his feet and read the floor mat: “Welcome to Success.”  Fast forward two years, and Jorge was walking into his first HBAS staff meeting. He realized, “I was standing on the same floor mat. I felt a tingling sensation on my skin and butterflies.” How’s that for a full-circle moment?!

Jorge Van Dyck started as an ESL student, was hired by HBAS, and now is the HBUHSD Classified Employee of the Year.  Jorge described graduating from the ESL Program and getting a job “like winning the lottery without a ticket.” Of course, we know there was no luck involved here: it’s just who Jorge is.

A Long and Winding Road to HBAS

Jorge’s journey to HBAS was one of unexpected twists and turns. Hailing from Guadalajara, Jalisco, Mexico, Jorge studied IT, computer systems and industrial engineering. While in college, he also produced fashion shows and TV programs.

In 2016, Jorge was in California for what was supposed to be a 4-month visit.  Everything changed when he was in a bad car accident and couldn’t return to Mexico. His months in the hospital were the start of his English training. “Not the ESL class you want to have,” Jorge reflected, “but I took advantage of it.”  He also met the person he would marry and moved to Huntington Beach. That’s how everything started, “by accident.”

Jorge flourished in our ESL Program.  He was proactive from the start, asking for letters of recommendation from his teachers and guidance our College and Career Specialist.  Always humble, Jorge said, “the only thing I did was walk behind the trees and collecting fruits.”

From Student to Staff

After completing the ESL program, Jorge served as an instructional aide for an 8-week workshop to teach computer basics to parents at Ocean View High School. Jorge immediately felt connected to the community and realized how much he loved helping people learn technology.

Jorge then heard about an opening for an Instructional Aide Tech at HBAS. He was hired and quickly became an indispensable part of the Diploma/GED team at our Westminster Mall Learning Center.  Jorge found that his own experience as an ESL student helped put students at ease.  He knows the fears and barriers they may have, and always tries to break the ice right away.

“Jorge is our tech guy, but he’s so much more,” explained Assistant Principal Courtney Winford. “He’s the heart of the Diploma/GED department. He is our creativity, our positivity. He’s our problem solver.”

Stepping Up: Tech Support and Beyond

Tech support is always essential, but never more so than during a global pandemic. It was a Herculean task to transition our classes from in-person to online.  For Principal Steve Curiel, Jorge stood out in “supporting our students and staff in adapting to what we never thought we would have done.”

Over the past year, Jorge helped students set up their Microsoft 365 accounts, check their email in Outlook, and attend class in Teams.  He helped teachers implement and troubleshoot new instructional tools while teaching at home and in the classroom. He has also developed step-by-step written guides and how-to videos for our YouTube Channel. Technology is always evolving, so often Jorge would finish a guide or video only to discover that Microsoft had made an update and he had to re-do it. Luckily for us, Jorge loves to learn and find the best ways to share his knowledge with staff and students.

Beyond providing vital tech support, Jorge also stepped up for our first ever Virtual Graduation Ceremony.  He took the lead and produced an amazing program.  When it was time to select a 2021 Classified Employee of the Year, the choice was obvious.

Principal Curiel was able to surprise Jorge with the Employee of the Year award during a live Teams meeting.  Jorge was truly surprised by this honor, but he was the only one.  Assistant Principal Phil Villamor explained that Jorge “is always excited to work with our students, always ready to help them access our technology.”  For Counselor Ashley Nguyen, what makes Jorge special is “his genuine kindness and eagerness to learn new technology and apps.”

There’s been a flurry of excitement for Jorge in the past couple of months. Jorge was not only chosen as Employee of the Year but was also promoted to a full-time ESL position at our Gothard campus. While everyone at the Mall Learning Center was sad to see Jorge leave their site, he will continue to support all departments in his new role.

When asked to imagine if his life went a different direction, like towards engineering, Jorge replied, “It’s hard to picture myself sitting at a desk doing one thing.”  And really, Jorge is an engineer at HBAS. Engineers solve problems. They are always learning and trying new things. Our staff and students feel like we won the lottery with Jorge. With his dedication and passion for learning, he's sure to welcome success wherever his path leads.